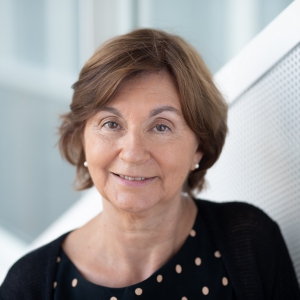 Suzanne Rivard is a professor of Information Technology (IT) at HEC Montreal and holds the Chair in Strategic Management of Information Technology at the School. She received a Ph.D. from the Ivey School of Business at the University of Western Ontario, and holds an MBA from HEC Montreal. She is credited with over 200 publications—scientific and professional articles, book chapters, books, conference proceedings papers and research reports.

In 2017, Suzanne Rivard received the Pierre-Laurin Award for Excellence in Research, in recognition of her outstanding career and her exceptional contribution to HEC Montréal’s scientific renown. In 2016, she was conferred an Honorary PhD, conferred by Aix-Marseille University, France. She became Fellow of the AIS (Association for Information Systems) in 2015. In 2009, she received the Marcel-Vincent Award from ACFAS (Association francophone pour l’avancement du savoir) in recognition of her outstanding contribution to the advancement of knowledge in the field of social sciences. In the same year, the Réseau Action TI – the main association of IT professionals in Quebec – named her “personality of the month” for her significant contribution to the advancement of the IT profession in the province. In 2007, she received the Gérard-Parizeau Award in recognition of her exceptional contribution to the field of social sciences.

Suzanne Rivard has been a member of the Royal Society of Canada since 2005. She is a Senior Editor with the Journal of Strategic Information Systems and an Associate Editor of the Journal of Management Information Systems. From 2010 to 2016, she was the Senior Editor for the Theory and Review department of the MIS Quarterly. Her influence goes beyond the research sphere as she serves as advisor to several organizations, mainly in the areas of IT project risk management, IT outsourcing management and strategic alignment of IT.